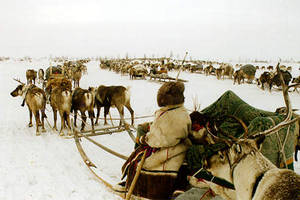 Voices from Tundra and Taiga

The NWO project "Voices from Tundra and Taiga" started in May 2002 and lasted until June 2005. In a number of subprojects, carried out by different teams throughout the Russian Federation, this project contributed to the strengthening and revitalization of various minor indigenous languages of the Russian North, including Nenets, Nivkh, Yukagir, Khanty, Mansi and others. The project was part of a general research program with the same name. Final report Short description of the overall approach: The topic of the research program "Voices from Tundra and Taiga" is the study of endangered languages and cultures of the Russian Federation, which must be described rapidly before they become extinct. This research is in the fortunate position that our earlier work on the reconstruction technology for old sound recordings found in archives in St. Petersburg has made it possible to compare languages still spoken in the proposed research area to the same languages as they were spoken more than half a century ago. These sound recordings consist of spoken language, folksongs, fairy tales etc., among others  in Siberian languages. In the NWO project we applied the developed techniques to some of the disappearing minority languages and cultures of Russia: Nivkh and Orok on Sakhalin and Yukagir and Tungus languages in Yakutia. Our aim is to set up a phono- and video-library of recorded stories, and of the folklore, singing and oral traditions of the peoples of Sakhalin and Yakutia. For this purpose the existing sound recordings in the archives of Sakhalin and Yakutia are used together with the results of new fieldwork expeditions. The data are added to the existing archive material in St. Petersburg and part of is made available on the Internet and/or CD-ROM. Spontaneous speech and prepared texts are collected that are valuable for (ethno)linguistic as well as for anthropological, folkloric and ethno-musicological analysis. For that purpose, the data are (video)recorded and analysed as to the art of story telling and language use. Described texts are published in scientific journals and books with audiovisual illustrations on CD-ROM and on the Internet. The materials thus become available for further analysis to researchers working in the field of phonetics, linguistics, anthropology, history, ethno-musicology and folklore. This information is also important for the development of teaching methods for representatives of the related ethnic groups and for the conservation of their language and culture. For this purpose the new centres are equiped with computers, software, sound recorders, literature, etc. The research and documentation is carried out in close co-operation with local scholars. In Yuzhno-Sakhalinsk and Yakutsk local scholars and their assistants participate in the archiving of the sound recordings and in fieldwork expeditions. They are trained at St. Petersburg State University and specialists from St. Petersburg State University also visit them in order to set up new centres for the study and teaching of local languages and related subjects. Voices from Buryatia In July 2005, Tjeerd de Graaf presented the final report of the NWO project carried out together with Russian colleagues in the framework of theVoices from Tundra and Taiga research program.The research group received positive reactions, both from scientists as well as from teachers, students, native speakers and local authorities. This applied in particular to Buryatia, one of Russia's federal republics in Siberia, where Tjeerd de Graaf and his Buryat colleague Ljubov Radnajeva visited several centres in June and July 2005. During special teacher seminars, they reported on the results of their projects and on the use of information technology in language teaching. Scientists and teachers from Buryatia are ready and eager to take an active part in the realization of similar new projects. A proposal for such a project has been prepared and submitted to the INTAS Organisation of the European Union. According to the latest UNESCO data, the Buryat language is considered an endangered language and is registered in the UNESCO Red Book of Endangered Languages. Meanwhile, many Buryat people demonstrate their wish that their children use the native language. Modern educational resources (such as computer-assisted language learning, multimedia teaching material) are almost non-existent in teaching the Buryat language. It should be mentioned that good and promising conditions exist to develop such teaching resources based on information technology. The proposed joint research project will make this possible.