During the last years several teaching methods for endangered languages have been developed and special seminars have been organised for teachers of these languages in Yuzhno-Sakhalinsk (2003), Hanty-Mansiisk (2004) and Buryatia (2005).

Teaching Samoyedic
Within the framework of the joint project "Writing and teaching Samoyedic", the Russian-Nenets Audio Phrasebook and the Nganasan Multimedia Dictionary have been created.
This work has been initiated by scholars in St.Petersburg and Groningen and financially supported by the Netherlands Organisation for Scientific Research NWO, Voices from Tundra and Taiga, the Russian Foundation for Humanitarian Research and the Endangered Language Fund. The results of this project will be applied to other minority languages.

(as part of the research program)

Teaching Nivkh
During his research work on Nivkh the Japanese scholar Hidetoshi Shiraishi (2002-2005 in Groningen, since March 2005 at Sapporo Gakuin University) has written a series of books with Sound Materials of the Nivkh  Language. These books are published together with the related sound material on CD and they can be used for the teaching of Nivkh. The World's Largest Sound Archive of the Nivkh Language on the Web can be found at the web site of Hidetoshi Shiraishi, which refers to the following publications:

Sound Materials of the Nivkh Language 1 (2002)
-Folktales of V.F.Akiliak-Ivanova- 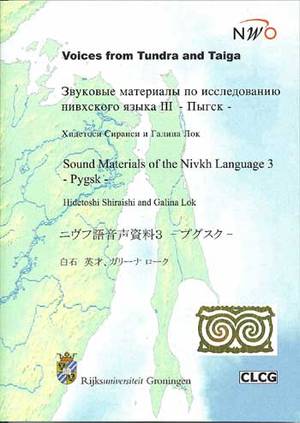 Preface to the third volume by Tjeerd de Graaf

In the summer of 2000 Hidetoshi Shiraishi and I spent a few weeks together on the island of Sakhalin, where we were on a fieldwork trip in the Northern village of Nekrasovka with representatives of one of the most important communities of the Nivkh on the island. Together with the first international ethnolinguistic expedition I had been there before in 1990 and it was a fascinating experience to be back and to meet a few of the same people and many others who were our informants and who showed us much about their culture and the use of their language.

In the beginning of September everywhere in the Russian Federation the traditional ceremony of the first schoolday takes place, so also on the 1st of September 2000 in Nekrasovka. Children with their parents gathered in front of the school, many brought flowers and were dressed in their best clothes. The director of the school gave a speech, music played and children read poems or performed in other ways. As special guests Hidetoshi and I were asked to address the children and their parents and so we did. It was a surprise for them that Hidetoshi spoke Nivkh, the language which at present is mainly used by the older generation. In practice most Nivkh parents use Russian with their children at home and they might still have some passive knowledge of the language. This situation is a direct consequence of the language policy used in Soviet times at the boarding schools which most of them attended: there the use of the own language was suppressed and Russian was introduced as the means of communication.

Only in limited cases there is a possibility to learn the language, such as in the school we visited in 1990 and afterwards in Nekrasovka. With great enthusiasm the local Nivkh teachers showed us how they are trying to pass elements of the Nivkh language and culture to the young generation. For most of the children the situation is different from earlier times: then the home language was Nivkh and the children heard Russian for the first time at school. Nowadays most of them are brought up in Russian and might hear Nivkh only from their grandparents. This implies that the teachers of Nivkh in the schools, where it is introduced as a subject, like in Nekrasovka, should present it to most children as a second language. For this purpose books and dictionaries have been developed and the teachers use special techniques to motivate the children and also the parents. They were deligthed to hear the words in Nivkh spoken by Hidetoshi and told us how important it is that a young Japanese scholar helps them with this task of motivating members of the Nivkh community to get interested in their own heritage.

From 20 until 25 October 2003 we organised a conference and teacher seminar on Methods for the Study and Teaching of Nivkh and Uilta at the Sakhalin Museum of Regional Studies in Yuzhno-Sakhalinsk. This was aimed at the realisation of one of our plans in the framework of the research project Voices from Tundra and Taiga : The creation of a research center on Sakhalin with the participation of teachers and scholars working on the island and involved in the teaching and studying of the local languages. During the seminar several project participants reported on their work and presented special lectures and exercises to about 35 representatives of the local languages. They were instructed about the newest developments and techniques and they could also be used as informants for our projects, in particular for the work on Nivkh by Hidetoshi Shiraishi. Together with Galina Lok he presented the second volume of their Sound Materials for the Study of the Nivkh Language to the participants. The teachers from Nekrasovka and other enthusiastic Nivkh informants attended this meeting and they expressed their admiration for the work of Hidetoshi and Galina Lok, who provided them with special new teaching facilities. Not only the Nivkh texts with Russian translation can be used in their classes, but in particular the sound recordings on the CD are important, for these show the use of the language as it is spoken.

With this book the third volume of the Sound Materials for the Study of the Nivkh Language will be available, which this time contains a series of conversations with and between Nivkh people.

In 2000 I was able to attend one of these recording sessions during the unforgettable meeting at the house of baba Vera (Mrs. Khejn), who had invited us in her cottage near the coast for a nice evening with delicious Nivkh dishes. Hidetoshi was able to record the conversation and he selected the most interesting parts, which not only show the use of the Nivkh language, but also the strong influence of Russian, which appears in the fragments of code switching.

The work on Nivkh is the research topic of Hidetoshi Shiraishi, who received a PhD scholarship at Groningen University and will finish his dissertation on Sound patterns and acoustic databases of the Northern language of Russia, in particular Nivkh, in 2005. He managed to record plenty of linguistic-ethnographic data, including recitations of folktales, legends, songs, natural speech, etc., which will be a part of his book. The material will be used for the study of some fascinating phenomena in the Nivkh language, which are of great interest for the other part of the book, the description of Nivkh phonology, where various linguistic hypotheses will be checked. The results of this research have been reported at the SOAS workshop on Training and Capacity Building for Endangered Language Communities in London in February 2004 and they will be included in the existing Groningen database A Guide to the Languages of Russia.