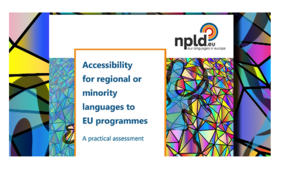 As every year, the Network to Promote Linguistic Diversity (NPLD) celebrates the European Day of Languages on 26 September with its networking breakfast. The 2022 edition will take place at the regional office of the Balearic Islands in Brussels.

This year, our (former) colleague Helga Kuipers-Zandberg and Mercator team leader Cor van der Meer have been invited to explain the report 'Accessibility for regional or minority languages to EU programmes'. This report from 2021 was written by Kuipers-Zandberg and fellow researcher Anna Fardau Schukking and commissioned by the NPLD. Kuipers and Van der Meer will talk about the main findings of this report, which is dedicated to an investigation into how European funding opportunities for regional or minority languages have been used and allocated in recent years.