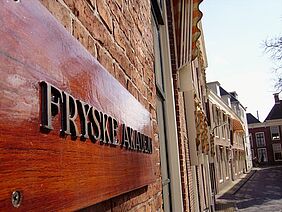 A delegation of representatives of the Bunjevac minority in Serbia, including Suzana Kujundžić Ostojić, president of the National Council of the Bunjevac national minority, community activist Apolon Savanov, and intermediary Dragan Kostadinović, visited the Fryske Akademy on Thursday 26 March.

Bunjevci, as they call themselves, are a South Slavic ethnic community living mostly in Northern Serbia and in Southern Hungary, in the transnational Bačka region. They identify themselves either as Bunjevci, Croats, or Bunjevac Croats. Bunjevci are predominantly Roman Catholics who speak a Serbo-Croatian dialect most commonly referred to as Younger Ikavian. Mrs Kujundžić Ostojić is actively working on the issue of standardization of the Bunjevac speech, and is one of the authors of the Bunjevac grammar issued last year.

The Bunjevac delegation was received by Hanno Brand, director of the Fryske Akademy, and Cor van der Meer, project leader of Mercator Research Centre, and had further exchanges with representatives of the Council of the Frisian Movement (RfdFB) and the European Agency for Smaller Languages (EBLT). The Bunjevac representatives expressed their desire for future cooperation with the Fryske Akademy and other European institutions and minority organizations.