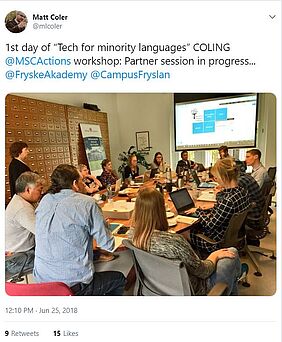 On Wednesday 27 June 2018, the Campus Fryslân - University of Groningen and Mercator/ Fryske Akademy hosted a symposium about digital technologies for minority languages.

This symposium was dedicated to activities through which researchers, companies and citizens can strengthen Frisian. Speakers from academia, the private sector and government discussed and showcased their work with interactive demonstrations of games and apps.

Increasingly, minority languages like Frisian are supported with digital technologies be they automatic translation, serious games, synthetic voices, online courses, or any number of dedicated mobile apps. These tools can help smaller and under-resourced languages by engaging new learners, facilitating online communities for minority languages, and can also play a role in documentation efforts.

The symposium was a part of the COLING workshop (made possible by the Marie Sklodowska-Curie RISE "COLING" grant) and took place in Gebouw Z in Leeuwarden (The Netherlands).